posted in Without category on 16 January, 2020 by Dokushô Villalba 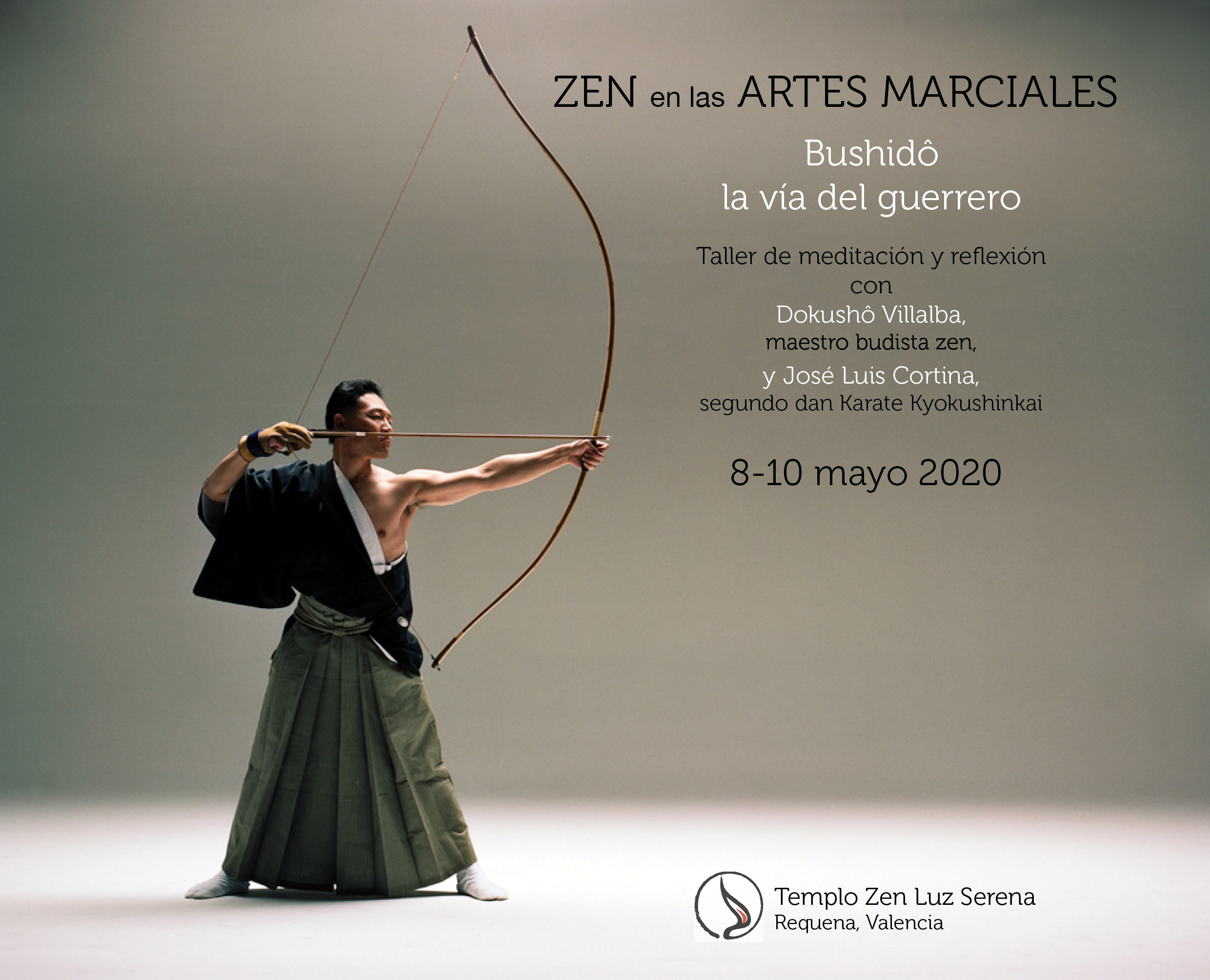 The art of the sword, of the spear, archery, of bare-handed combat is, as a last resort, almost as old as man, that he has always had a need to defend himself against the aggressions of the outside world and to hunt to ensure his subsistence and that of his tribe.

When Zen comes to Japan, found a people whose usual occupation was war: civil wars, violence, plunder, massacres, deportations, separations were, from the north to the south of the country, the common luck of the Japanese of this time. The genius of Zen transformed the brutal techniques of war into arts that did not care much about warrior efficiency but about the search for himself.. All these techniques became methods of spiritual improvement. Saber, the bow and arrows were no longer instruments of death, but meditation supports. This combat became a purely spiritual combat, the enemy was discovered in himself, in the ego's illusions that prevent us from seeing our true nature and which must be mercilessly destroyed. Under this wonderful influence, was born Bushidô, set of moral principles, code of honor, chivalric discipline that recommends the culture of physical and moral qualities, Courage, simplicity and frugality, loyalty and justice, the disinterest and contempt of death. So much and so well that Zen was called "the religion of the samurai".

In this meditation workshop we will work on the Zen principles that transformed the Japanese martial arts on the way to awakening and we will see how to integrate them into the practice of martial arts, whatever each one practices, as well as in everyday life.

The ‘Zen in Martial Arts’ workshop is aimed at practitioners of any martial art and also at anyone who wants to find inspiration for life in both disciplines.

After dinner, We will meet in a Presentation Circle in which each participant can express their vision of the martial art they practice and in which the workshop program will be presented.

On Saturday morning we will start with exercises in the open air to activate the energy, the ki, directed by José Luis Cortina.

After breakfast, Zen master Dokushô Villalba will present Zen and its influence on Japanese martial arts.

Next, give a practical introduction to zen meditation.

In the afternoon we will start with the work sessions. Each work session will consist of a theoretical presentation, of a work of reflection in small groups and of a sharing. Throughout the workshop there will be five work sessions that will develop the following principles:

Bushidô: the knowledge and improvement of oneself.

Fudochi, the wisdom of non-movement.

Sutemi, the abandonment of body and mind.

We will alternate the practice of sitting meditation, walking meditation, the activation exercises ki and the work sessions, with spaces for rest and walks through the natural environment of the temple.

Dokushô Villalba He is a Zen Buddhist teacher. He was ordained a Zen priest in 1978, from the Very Venerable Taisen Deshimaru Roshi, and the transmission of the Dharma of Myu Venerable Shuyu Narita Roshi, in 1987. He is the founder of the Spanish Soto Zen Buddhist Community and the Luz Serena Zen temple.. Writer, translator and lecturer, has published more than thirty books on Zen Buddhism and Eastern spirituality, among them “Zen and Martial Arts”, de su maestro Taisen Deshimaru,

Jose Luis Cortina Ábalo es Segundo Dan Karate Kyokushinkai. He started practicing on 1973 at the Budokway Dojo under the direction of the senseis, Jose and Vicente Romero, as well as Sensei Francisco Tapia. Later in England, obtained the shodan black belt under the direction of Shian Steve Arneil and Howard Collins. Later he obtained the second Dan by the Spanish karate federation. He was runner-up in the President's Cup of katas in 1976 and champion of Spain Suska Karate Open in 1982. During 47 years he has combined his karate practice with his work as an airline pilot. Does 18 years he began to practice Zen, in a formal and disciplined way, under the direction of the teacher Dokushô Villalba.

The Zen Luz Serena temple is located on a property of 33 He has. of pine forests in an area of ​​winding hills between the province of Valencia and Albacete, a 5 Km. of the Cabriel River, in the buffer zone of the Hoces del Cabriel Natural Park. It is one of the best preserved natural places in the Valencian Community, that meets excellent conditions for the practice of meditation, rest and reflection. It was founded in 1989.

At the time of registration you must enter 100 € for the reservation of the place, that will be discounted from the total contribution.

Information and reservation of place: