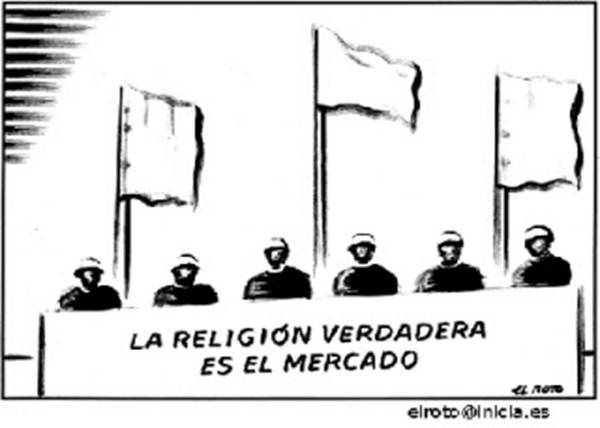 Welcome to the market square.

Perhaps the facts that characterize the global situation of planet Earth in this 21st century are:

Although this is so, what actually characterizes the historical moment that we live is the emergence and expansion of a new system of values ​​and beliefs, whose religious function is hidden behind the packaging secular with which it is presented. The true global phenomenon, the only religion truly global, that has spread from the north to the South, from east to west, permeating practically all the collective institutions and consciences of human beings, It is the religion of the Market God.

The market is the new god of modern times. The economics is his theology, and the economists, his theologians. Advertisers and the media are his best preachers, and most of the politicians, your public relations. Production-consumption constitutes its central religious rite, and the accumulation of benefits, fit capital, objects or riches, your paradise on earth.

It doesn't matter which traditional religion you belong to, It does not matter what the god is called or the temple in which it is done. It doesn't matter what ethnicity or culture belongs. It doesn't even matter if you're rich or poor, that you live in a great metropolis or in the deepest from a remote jungle. Whether we want it or not, whether we realize it or not, saw ours- everyday days take place in the bosom of a cult that pays tribute to the Market God. We live by the interpretations that sumos make priests of the will of the Market God. Even though we have never done formal profession of faith to enter this religion, they have entered us in her without asking our opinion and, it which is more serious, without us even realizing.

There has not been in the entire history of mankind a mass manipulation phenomenon so large, so effective and devious like this, since the perfect manipulation is that that does not appear as such, but as the natural order of the world.

Market religion is the modern religion that provides the most attractive value system for most of the world. world population. The majority of people, even if he confesses himself a christian, Muslim, buddhist, atheist, Hindu, Jewish, and so on, has adopted and assumed these values ​​as an expression of the One True Reality and as the Natural Order of the World.

The religion of the market is, how will we see, a totalitarian religion that is devastating not only human societies, the environment and the great values ​​of civilizations that have been reached later of many centuries of evolution, but also is pulverizing the principles and spiritual practices taught by all other religions, which, day by day, they have not been able to do face nor counteract the power of seduction and the influence of this new totalitarianism.

Although wars and conflicts have existed forever in human history, Y many of them have been and are of religious origin, just study the genesis and the development of most of the wars, of armed conflicts, of degradation ecology and the dismemberment of societies to realize that at the base of almost all of them is the religion of the market.

It would take a long time to dwell on the causes and the historical process through which this new religion has appeared., and this is not the central theme of this book. The fact is, the Market God religion is here, now, widely spread. Its tentacles have infiltrated the very heart of our institutions, in our political system, in our family, in our relationships and in our individual value system, that is to say, in our perception of the world and our role in it.

We have the responsibility individual and the historical imperative to become aware of the reality in which we live, of the crisis global we are traversing. We need investigate its causes and set up a new system of goes- lords that allow us a truly human existence.

We have to recognize that, whether we know it or not, we have been converted to a new religion. This religion, even if it is of European origin and has its roots in the Protestant ethic, has spread worldwide. Your name full could be 'individualistic religion of the economy and market », but, abbreviating, I will call it "religion of the market".

The religion of the market it's a totalitarian ideology. Convince by force. First for the force of persuasion and deception (advertising, media), later by the force of pressure economical (if you don't do it like i say, you won't be able to survive) Y, by last, by the might of the mighty armies and the arms industry, who work for her (in the event that someone he persists in not accepting his principles).

The religion of market is based on a double sacrament: the production and consumption. What you expect from your followers is that they produce the more the better (although what they produce is not of any real utility for life) and what with- add up the more the better (although what they consume be of no real use). Those who fulfill this sacrament are considered members of full rights and obtain the visa to the paradise of the unlimited benefit destined to the chosen ones.

Persuasion of the market religion propagators is so subtle and effective that we do not realize that we are being forced to commune with their rites. It's more, we don't even realize that we are following their rites and we believe that what we do is the result of our free will. If someone tries to get out of the ritual imposed by the Market God will find himself outcast, jobless, penniless to pay for food or a roof, no credit card, no credit…, outlaw…, how are they millions of human beings on planet Earth who have not yet been initiated in this modern ritual.

THE FUNDAMENTAL LAWS OF THE MARKET RELIGION

The religion of the market is based on laws, explicit or tacit, whose obedience is imposed on all:

Fourth law: nature is nothing more than a reserve of re- courses necessary for the process production or a mass of land to speculate with. Nature is nothing but a set of inert objects whose only utility is to be exploited to extinction.

Fifth law: social heritage, cultural and spiritual capital is fungible that can be bought or sold.

Sixth law: the value of things is only represented by the price.

Eighth law: you must have faith in progress, understood as economic growth (material) unlimited. In the future, more and better material goods and you can with- sink more and accumulate more Benefits.

Ninth law: the desire to consume more and accumulating more and more goods will allow you achieve maximum happiness.

Tenth law: only wins the most strong. To consume you have to accumulate. Competitiveness is the golden rule. Ethical principles such as compassion, altruism, solidarity or generosity should be considered superstitions of the past.

From "Zen in the market square"

4 Comments → The Religion of the Market God